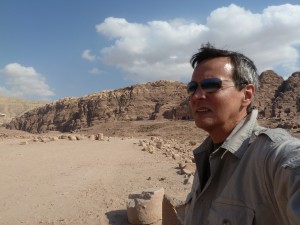 I am honored to have on another fellow International Thriller Writers debut author, G.M. Lawrence.

His debut novel, Q: Awakening, has been praised by early critics for its lyrical prose, spellbinding settings (based on his actual travels), artful suspense and alluring characters that define a new breed of thriller. The philo-thriller. The book was recently awarded the ForeWord Clarion 5 Star Review.

Q: Awakening is the tale of the lost Christian gospel called Q – for the German word “quelle,” the source – and the vulnerable, complex man whose destiny is inextricably intertwined with it. This international thriller takes you on a ride from the stormy coasts of New Zealand to the deserts of the Sinai and from the cobbled streets of Zurich to the soaring minarets of Beirut. 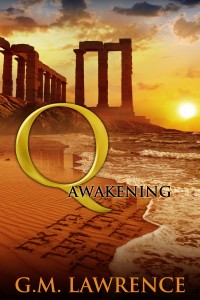 Stories Make Us Who We Are…And Who We Might Become
By G.M. Lawrence

In 1945, two young Bedouins wandering the deserts near Nag Hammadi in southern Egypt stumbled across a cache of ancient documents hidden in a heavy earthen jar. The vessel contained twelve Coptic codices bound in gazelle skin that have come to be known as the Nag Hammadi Library. In and of itself, their discovery was one of the most important archaeological finds of all time. But for scholars of the elusive manuscript called Q, the Nag Hammadi Library offered the first tangible evidence that it truly might exist.

The idea of writing a philo-thriller based on the Q Gospel came to me as I explored one of the greatest collections of ancient manuscripts in the world, the nearly two thousand year old library of the Monastery of St. Catherine deep in the Sinai desert. I wanted my story to be as genuine and as real as I could make it while at the same time retaining all the entertainment and excitement of a fast-paced international thriller.

In short, I wanted to write a work of literary fiction in the guise of a thriller (“Ann Patchett telling a Steve Berry tale” to quote my editor), with the goal of rewarding readers of both genres.  So notwithstanding the dangerous and tumultuous times in the Arab world, I travelled extensively throughout the Middle East (the setting for much of the story) where I interviewed Bedouins, scholars, black-ops soldiers, priests, monks and many more.

With the aid of Israelis, Palestinians, Egyptians, Syrians, Jordanians and even New Zealanders, I visited nearly all of the lands I have written about in my new philo-thriller Q: Awakening. I crossed the Sinai from the Straits of Tiran to St. Catherine’s (the inspiration for my fictional monastery, Dier al Shuhada and its third century scriptorium).

Guided by Bedouins (who placed their arms across my shoulders and whispered “Or-o-ence, Or-o-ence, your forefather was a great man. He helped us. With honor, we now help you”), I crossed desolate stretches of wilderness in revolutionary Egypt, passed through tense security check posts manned by ill-omened soldiers armed with Uzis and grenades, and even slipped past the unmarked border that separates Jordan from Syria to glimpse a world gone mad.  At midnight, around campfires that burned beneath a canopy of stars, my companions and I sipped premier-pharmacy.com/product/proscar/ sweet mint tea and talked of the desert, of God, and of destiny.

After my season among these unexpectedly generous and friendly nomads, I flew half way around the planet to the remote and alluring South Island of New Zealand, home-in-exile to the man who stands at the very heart of my story—the conflicted and very flawed hero-searcher, Declan Stewart.  With my good friend Bruce Hopkins (the actor who portrayed Gamling, General of Rohan in the Lord of the Rings films) beside me, I walked Declan’s desolate, storm-tossed beaches near the fictional town of Graves Bay and the deadly reef called Ghost Ships.

I rode the towering waves of the Tasman Sea that Declan surfed, and in the quiet moments, as the antipodal summer sun vanished into an endless ocean, I contemplated the mysteries of God, Q, and humankind, all as Declan does in this book, the first of the Q trilogy. For in the end, my journey was not so different from Declan’s.  Ostensibly, I was researching a book, and he was in pursuit of an ancient manuscript.  But in truth, both of us were doing what we all do at some point in our lives—searching for meaning and purpose in the tragedies and challenges that define the human condition.

As I studied the history of Q, wandered across the many varied lands that I researched, and came to know the diverse peoples and cultures that are so much a part of the Q saga, I felt the same eerie sensation with each step along the way. I felt that I wasn’t so much writing a story as I was recording a story that was being revealed to me. Is this what it’s like to be a prophet? I wondered. To sense revelation, to be shown something important, and then be duty bound to share it? I don’t know, because I’m only a writer, not a prophet.

But anyone who tells you that stories can’t change us, can’t script new and divergent destinies for us all, tells you lies. Stories make us who we are and shape who we might become. So be careful with books, especially books like Q. To read a book is to elect a course along a forking path.  To make a choice is to shape your destiny.  If you don’t wish to risk becoming something other than what you are, you should leave stories like this alone.

G.M. Lawrence is the founder and chairman of the international investment fund, Pacific Venture Investments, a university lecturer and distinguished scholar. He is a former deep-sea diver, a marine conservationist, and a surfer whose travels take him into the very heart of the exotic and often dangerous locales he writes about. His cultural experiences throughout the Middle East and his association with well-known members of the worldwide surfing community infuse his locales with realism and his characters with an emotional depth that is rare in contemporary thrillers.

In addition to writing fiction, Lawrence is the author of the perennially best-selling business books and is a frequent speaker at domestic and international investment conferences. He and his family divide their time between their homes in Southern California and Texas. Q: Awakening is his first novel and the first in the Q trilogy.