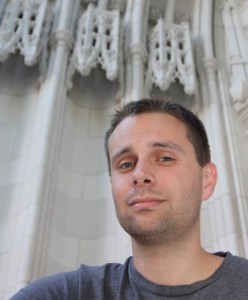 Fellow International Thriller Writer Debut Author and world traveler Jeremy Burns sits down today to talk about writing, research, and his next release.

His debut thriller, FROM THE ASHES, is called a “a thrilling race against time to expose a diabolical conspiracy that would shatter everything we think we know about the 20th century” by  bestselling author Boyd Morrison.

Q. Tell us about your current release.

FROM THE ASHES is a historical conspiracy thriller that’s been described as BOURNE meets NATIONAL TREASURE.  While investigating his brother’s murder, Jonathan Rickner uncovers a deadly depression-era conspiracy entangling the Hoover Administration, the Rockefellers, and the rise of Nazi Germany.  With a covert group of governmental assassins determined to 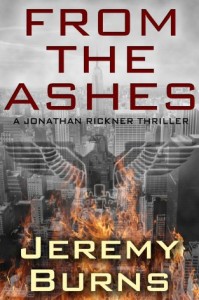 perpetuate the cover-up on his trail, his only hope for freedom is to discover and reveal the last remaining proof about the original conspiracy – proof that John D. Rockfeller Jr. hid seventy years ago somewhere in the city of Manhattan.

FROM THE ASHES released in January to fantastic reviews and solid sales, and it’s landed me a lot of really great fans that are constantly asking me about Jon’s next adventure.  Which leads me to…

Q. Tell us about your next release.

The second book in my Jonathan Rickner series, THE DESERET BLUEPRINT, steps up the ante with a larger scope – both geographically and historically – and even higher stakes than FROM THE ASHES.

Bringing together the turbulent history of the Mormon church and the modern-day chaos of radical politics and homegrown terrorism, THE DESERET BLUEPRINT involves a real-life band of militant religious fanatics dating back to the nineteenth century, a wave of terrorism that uses our own post-9/11 security protocols against us, a controversial prophecy with ties to the U.S. Constitution and the future of the country, and an ancient weapon hidden by Brigham Young in his plans to strengthen and solidify his theocratic kingdom.  In a cross-country adventure featuring a terrifying new villain, hidden secrets from the frontier foundations of the Mormon church, and a shocking conspiracy two centuries in the making, THE DESERET BLUEPRINT will be Jon’s biggest and boldest adventure yet.

THE DESERET BLUEPRINT has actually been in the planning and researching stages since mid-2006, so it’s interesting to see how much the prevailing zeitgeist and certain key current events mirror the world I’ve created in this book.  Though I don’t have a concrete release date yet, THE DESERET BLUEPRINT should be available early next spring.  Stay tuned to www.AuthorJeremyBurns.com and www.facebook.com/JeremyBurnsBooks for more on this and other upcoming books.

Q. Does travel play in the writing of your books?

Absolutely.  I love traveling exciting new set pieces in which to place my scenes.  For FROM THE ASHES, I made several trips to New York City, exploring most of the monuments, churches, museums, and streets that my characters encounter throughout the book.  For THE DESERET BLUEPRINT, I did the same in Salt Lake City.  It is always a true pleasure to see the world from my characters’ eyes, to walk where they would walk, sense what they would sense, discover what they would discover.

I lived in Dubai for two years (a strange and fascinating place), and I’ve traveled to more than twenty countries across four continents thus far (many of my upcoming books will be set some of the exotic locales I’ve been blessed to explore – and those that I will explore in the near future).  Travel is very much a part of my creative and inspirational process.

Q. Say your publisher has offered to fly you anywhere in the world to do research on an upcoming book, where would you most likely want to go?

Armenia.  Most of the planned third book in my Jonathan Rickner series will take place in Armenia/Eastern Anatolia and in the Yucatan Peninsula.  Since traveling to the Yucatan is a less expensive flight from where I live, I’d take the Armenian trip for free.

Q. What is the hardest part of writing your books?

The research.  Don’t get me wrong, I love researching and learning about all sorts of new subjects (and, let’s be frank, as an author, you get to learn about anything and everything that interests you).  The hard part is having to figure out which of the many incredible ideas my research has given me actually has a place in the story, and which premier-pharmacy.com/product/arcoxia/ elements must stay on the cutting room floor.

Q. Do you hear from your readers? What kinds of questions do they ask?

The two biggest questions my readers ask me are 1): Was the historical conspiracy in FROM THE ASHES real? (I put an author’s note at the end of my books to help separate the truth from fiction, but, of course, I can’t disprove the conspiracy…) and 2): When is your next book coming out? (Answer: soon!).

Q. Do you have any suggestions for beginning writers? If so, what are they?

Write what you’re passionate about, not what you think will sell – your passion will come across to your readers, and they’ll love you for it.  Write every day.  Read daily and read widely.  Find out what inspires you and dig in.  Travel.  Get to know other authors – it’s a lonely game we’re in, but community and friendship with others in the same profession will really help your craft and your perspectives.  Go to writers’ conventions – ITW’s ThrillerFest really helped me develop my craft and make some fantastic connections and friendships within the industry. And finally, stick with it: if your story is interesting enough and your craft keeps improving, eventually you’ll find an audience, especially in today’s online marketplace.

About FROM THE ASHES:

Graduate students Jonathan and Michael Rickner, sons of eminent archeologist Sir William Rickner, are no strangers to historical secrets and archeological adventures.  But when Michael is discovered dead in his Washington, D.C. apartment, Jon refuses to believe the official ruling of suicide.  Digging deeper into his brother’s work, he discovers evidence that Michael was murdered to keep his dissertation research buried. Joined by Michael’s fiancée Mara Ellison, Jon travels to New York where he uncovers the threads of a deadly Depression-era conspiracy – one entangling the Hoover Administration, the Rockefellers, and the rise of Nazi Germany – and the elite cadre of assassins that still guard its unspeakable secret. Finding themselves in the crosshairs of the same men who killed Michael, Jon and Mara must navigate a complex web of historical cover-ups and modern-day subterfuge, outwitting and outrunning their all-powerful pursuers as they race through a labyrinthine treasure hunt through the monuments and museums of Manhattan to discover the last secret of John D. Rockefeller, Jr., before their enemies can bury the truth – and them – forever.

“FROM THE ASHES is a thrilling race against time to expose a diabolical conspiracy that would shatter everything we think we know about the 20th century. With clever puzzles, enigmatic clues, and hidden secrets, Jeremy Burns re-imagines New York’s landmarks so vividly that you will want to explore them all over again.” – Boyd Morrison, bestselling author of THE ARK and THE VAULT

“With FROM THE ASHES, Jeremy Burns establishes himself among the best authors of taut, historical thrillers. In this gripping debut, Burns lays bare a fascinating conspiracy of deceit, full of action and twists. Truly, a must-read for fans of suspense, action, and history.” – Robert Liparulo, bestselling author of THE 13TH TRIBE and COMES A HORSEMAN

Jeremy Burns is the author of the hit Jonathan Rickner series, including his debut thriller, FROM THE ASHES, and the upcoming THE DESERET BLUEPRINT.  Blessed (and, at times, cursed) with a decidedly active imagination and an insatiable curiosity for nearly everything, Jeremy learning and storytelling have long been two of his chief passions. After earning his degree in History from Florida State University, Jeremy accepted a position teaching literature, creative writing, political science, and philosophy at an international school in Dubai. Like the characters in his books, Jeremy is an intrepid explorer whose own adventures have taken him from Mayan ruins in the Yucatan to the pyramids of Egypt, from medieval castles across Europe to the jungles of Bangladesh, and beyond. To date, Jeremy has traveled to more than twenty countries across four continents, seeking adventure, discovery, and ideas for future novels. He is an active member of International Thriller Writers and a contributing editor for THE BIG THRILL.  When not exploring a new corner of the globe, Jeremy lives in Florida, where he is working on his next thrilling novel.

Purchase FROM THE ASHES in trade paperback or eBook from: