Excerpt from A Human Element 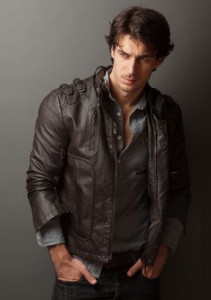 Ben Fieldstone watched the coffin as it was lowered into the earth and fantasized new ways to kill his foster father.

He drags Frank in his drunken daze to the shed, holds up his reeking body, and presses his head in the vise on the workbench. He winds the mechanism . . . tighter, tighter . . . Frank mumbles and shrieks . . . his skin splits and blood oozes down his face.

He didn’t know what would happen if you squeezed someone’s head in a vise. Would it just pop and bits of brain and blood explode outward or would it be a slow, bloody mess? His heart pulsed quicker just thinking of it. He knew he could never kill Frank, though. Ben was tall, but thin, and no match against Frank’s bulky, squat frame.

“Hey, let’s go.” Frank nudged him. “I need to get outta here.” His red-rimmed eyes made him appear forlorn over the passing of his wife, Emma, but Ben knew it was the booze. He nodded and flicked his bangs from his eyes and glanced over at the man who had been standing motionless across the cemetery throughout the service. He stood with his legs far apart, an immense figure clad all in black. Ben couldn’t see his face. Who could he be and why was he was there? But Ben had bigger problems to deal with now. He ripped off his black jacket and headed toward the rusty car baking in the blistering August heat. It was as if the world had taken its last breath. Summer had sucked the life out of all things green, leaving the cemetery a burnt landscape. His shirt clung to his chest, and the sweat rolled down his back.

He already missed Emma. His foster mother had been kind to him, when she was sober. But when drunk, she had stared at the TV, ignoring Frank’s rages. Those were the nights Frank chased him around the house. Sometimes he used the belt, the one with the heavy metal buckle on it that could catch him across the tender parts behind his knees. Sometimes Frank just liked to kick and pummel. Ben, at seventeen, was afraid to fight back. He’d weather the beatings until he turned eighteen. He had been in five foster homes over the past eight years. He’d seen worse.

He and Frank drove back in silence.

“You need to take over Emma’s place now.” Frank pulled up to their small bungalow. “The laundry, dishes, cleaning . . . grocery shopping, too.”

A tear slid down his sagging cheek. He didn’t bother to wipe it away. Ben tried to feel sympathy, but staring at Frank’s rough hands on the steering wheel, he only knew hatred.

“No problem.” Ben jumped out of the car. Up in his room he stretched out on his bed and let his mind wander. If he hadn’t run away the night at the lake, he would be dead too, just like his parents. Sometimes he wished it had happened. Dead would be better than this place. Since then he had closed himself off from people. He didn’t want to take the chance of loving anyone again. If a foster family decided not to keep him, he couldn’t be hurt by their rejection. So he shuffled along from family to family, biding his time. He kept his painful memories just beneath the surface. He closed his eyes against them and dozed off.

When he woke up, dark enveloped him. Banging noises came from downstairs. He jerked upright. What could Frank be doing? He eased out of his room and moved with quiet control down the stairs from his room. He found Frank smoking at the kitchen table. The light hovered dim, the globe full of dead bugs. Ben counted nine empty beer cans scrunched up on the table.

“Want something to eat?” he asked, to gauge Frank’s mood. He opened the fridge.

“If I wanted something to eat, don’tcha think I’d be eating it?” Frank spat on the floor. Grimacing, he dropped his head on his arms and started to cry.

Ben stood still. The sobbing bounced off him. He shifted from foot to foot the longer Frank cried. He forced himself to move nearer and placed his hand on Frank’s thick shoulder.

“We’ll be okay. You’ll see.” Ben tensed and snatched back his hand in disgust. As he turned back to the fridge, Frank touched his bottom. Ben stopped mid-step. He held his breath. He told himself it was just a light pat. Until the pat became a caress. It lingered. Soft in its want. He darted to his room, not looking back.

He dragged out his backpack from beneath his dusty bed and filled it, keeping one ear cocked for Frank’s approach.

He shoved the backpack under his bed. The door swung open, and there stood Frank.

“Don’t ever walk away from me. You hear?” Frank leaned on the doorframe; his shirt clung to his gut.

Ben nodded with his head down, hoping Frank would leave. He had a terrifying vision of Frank throwing him on the bed, pulling down his jeans, and mounting him like a pig. He clenched his buttocks together.

“Why don’t you answer me?” Frank staggered into the room, his face red and sweaty. He grabbed Ben by the shirt. “Get up!”

Ben shook off Frank’s hand. “Leave me alone! You make me sick.”

Frank’s eyes narrowed. He shoved Ben down. He kicked him in the back, then the head. Ben curled into a fetal position.

“Who do you think—you—are?” Frank delivered a kick with each word.

Fury exploded through Ben’s brain. He grabbed Frank’s foot mid-kick, throwing him off balance, and punched him hard in the chest as he fell. He had never hit him before. Frank made a loud whoomph as he landed on an elbow. He slowly stood and clutching his elbow, took a shaky step toward Ben. But then Frank’s red face suddenly turned pale and he grabbed his left shoulder. He contorted in a twisted dance. With a gruesome grimace, he stumbled out of the room.

Ben touched his forehead. Blood oozed slick. He wasn’t sure what just happened. But he was glad it did. His hands trembled. His back knotted with pain. He had to get out. He pulled out a boot from under his bed and grabbed a roll of money he had been pilfering from Frank’s top drawer over time. He had enough for a bus ticket and a cheap room. He’d find a place where no one could hurt him again. If he was found and brought back to Frank the beating might be more than he could take. But he had to face this fear. If Frank did more than beat him he would want to die anyway.

He swung his backpack over his shoulder and looked back at the bare room. He had never belonged here. He fought off self-pity and pushed open the door to listen. The television’s ghostly light poured from Frank’s bedroom and murmured old comedy.

Ben tiptoed to the door. Frank sat in bed, his eyes shut. He had passed out, an arm spread out on his leg. A cigarette hung from his fingers, the ash still glowing. The television flickered, canned laughter filled the room. Ben kept his gaze on the cigarette. The ash grew. Then the cigarette slipped. It quivered. It tumbled in slow motion. Nothing happened. The sheets smoldered. Laughter rang out again. Ben looked at the television. Some character ran around a kitchen. His gaze returned to the fallen cigarette. Minutes passed like hours to him.

He needed to choose. Run, or pick up the cigarette and prevent the certain fire? If he did nothing and Frank died, would he be a murderer? But Frank could have killed him just now. Might still kill him, or worse, if he ever caught him. He continued to stare where the cigarette fell.

The flames burst up from the sheets and fanned along the comforter, framing Frank in a soft glow. They licked with hungry abandon through the old bedspread until Frank’s image blurred. Why didn’t Frank wake up? But he looked so serene, so harmless. Ben felt free and safe seeing him like that.

And he knew. He had to live. He wanted to live.