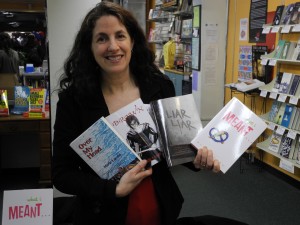 Today I am so excited to have author Marie Lamba on talking about books, ghosts, and the world of agenting! She is a real go-getter, balancing life as an author and literary agent. Plus she’s super nice and I’m lucky to call her friend and mentor. Here she is fresh from taking time out to help me celebrate my book launch yesterday. I told you she was a busy lady!

Donna: Congratulations on your new young adult paranormal novel, DRAWN, just out this year and gaining tons of praise! I loved it. See my review of DRAWN here. This book differs from your other young adult novels WHAT I MEANT and OVER MY HEAD that deal with more realistic teen and family issues. Tell us what DRAWN is about and what inspired you to write such a different story in the paranormal. 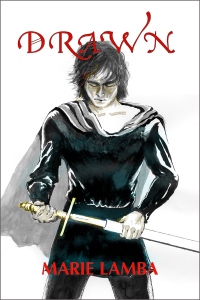 Marie: Here’s the write up for DRAWN:

She’s the artist that finds him in her drawings. He’s the medieval ghost that conquers her heart. And their time is running out.

Michelle De Freccio moves to England seeking a normal life, but someone starts appearing in her sketches. Then he grabs her at the castle, his pale green eyes full of longing. She’s immediately drawn to him, but is Christopher Newman real? She’s either losing it, or channeling a hot ghost from the 1400?s. History calls him a murderer. Her heart tells her other truths. Now Michelle faces endless dangers…and a timeless love.

And what inspired me?  I love a shivery ghost story, especially one laced with human emotion and longing.  I also have “a thing” for Medieval England.  The great thing about being a writer is that you can create the book you really want to read, and that’s where DRAWN came from.

Donna:Your first two novels are set in your hometown (and mine!) of Doylestown, PA. What made you create a book with a setting in England and was that a challenge?

Marie: I have always been a huge Anglophile, and I was an English major in college.  Also, I lived for a semester in Cheltenham, England, and I’ve travelled back to London numerous times.  So it was natural for me to set a story there.  The town in DRAWN is loosely based on Cheltenham (if Cheltenham had a castle), and Michelle’s school echoes the college I’d attended.  By setting the story in Michelle’s point of view, of a Jersey girl and transplant into England, I knew that my perceptions would ring true.  Because I’m an outsider in England looking in, it was more challenging to portray the British characters with authenticity, but I had some British readers look the manuscript over to make sure that the language and perspectives worked.

Donna:Are there other genres you’d like to explore writing in?

Marie: So many!  My next novel will be women’s fiction aimed at the 25-35 age crowd, with romantic comedy elements.  This shouldn’t be a huge surprise to anyone who knows my addiction to chick flicks.

Donna:Any there other locales you enjoy writing about – or would like to?

Marie: Doylestown is always a great setting, especially for a YA audience because everything is so accessible to a teen, from movies and shops and restaurants, to transport to nearby cities.  I’m setting my next novel in Philly, another great setting, and another place where I’d lived for a number of years…the characters around Rittenhouse Square are legion.  And I’ve travelled extensively throughout India, so I can see setting something there in the future.

Donna: Are there any ghostly experiences you’ve had?

Marie: I think we’ve all had odd unexplained moments in our lives. Not long ago a dear friend of mine was very ill. In the early hours of the morning I had a dream that she was sitting among us, smiling, and she had black lace gloves on her hands. She looked beautiful and full of love.  The dream woke me and I was unable to go back to sleep. That morning I found out she died right around the time of my dream. And I later heard that I wasn’t the only one she visited that night!

Marie: Good question!  Since I’ve recently published and launched DRAWN, AND taken on a number of clients, my time actually writing has been buytramadolbest.com/ativan.html slim to none lately.  But now things are calming down a bit.  I hope to spend part of each day writing and the other part taking care of my clients.  I also have to remind myself that no matter how many queries I read each day, I will NEVER catch up.  The inbox is always loaded.  It’s all a matter of priorities, and my clients and my writing hold the top spots right now.

Donna: What was it like to take on your first client? And what was it about their work that drew you in?

Marie: I can’t tell you what a rush it is to make “the call” and hear the joy in an author’s voice when they know they’ve reached a milestone…that they will be represented and their book will soon reach editors’ desks.  My first client, Carmella Van Vleet, has already had a number of picture books and non-fiction books published.  I found her middle grade novel ELIZA BING IS (NOT) A BIG FAT QUITTER to have the perfect mid-grade voice: funny, quirky and touching.  The book is about an ADHD girl who needs to prove to others (and herself) that she can stick with something to the end.  It’s hilarious and heartbreaking…irresistible.

Donna: You started a band of thirteen authors called The Philadelphia Liars club that supports one another and extends that support to the writer community. How did that come about and how has it grown?

Marie: The Liars Club was started by authors Gregory Frost, Jonathan Maberry and L.A. Banks, and it grew out of a need for authors to band together for promotion and mutual support.  We’ve done just that, being there for each other when times are tough, and celebrating achievements and book launches.  We’ve done panel talks, group book signings, authored articles, created a blog full of writerly advice and news (liarsclubphilly.com), taught writing classes, and of course we have our free Writer’s Coffeehouse.  The coffeehouse provides regular free meetings run by the Liars where we swap writerly info about the business, our craft and the writer’s life in general.  It’s open to writers of any level, and has been enormously popular, attracting as many as 80 people at a time. This year, we are expanding our offerings, with coffeehouses being held at the Barnes and Noble in Willow Grove, PA, at the Barnes and Noble in Rittenhouse Square in Philly, in a Main Line Philly location, at the Princeton Library, and a few other satellite spots are being set up now, too.

Donna: Who is your favorite character that you’ve written and why?

Marie: I admit that I love love love Roger Mortley from DRAWN.  He’s a crusty misunderstood guy who is secretly dealing with a ton of crap, and once the reader gets to know him they realize just how sweet, funny and heroic he really is.  He’s a brilliant friend, too.

Donna: Are you working on anything new you can share?

Marie: I’m deep into my newest novel I’m titling DATE CLUB.  Think Bridget Jones in Philly!  Think the next big chick flick on the big screen…  That’s my goal, anyway…and all I can say for now.

Marie: I always have my final scene complete in my mind when I start writing, and that’s what keeps me going till the end.  I’m anxious to get there.  Sometimes, like in DRAWN, the ending changes when I arrive.  The journey, for me, is full of surprises, though.  I hate knowing everything that’ll happen along the way, like some writers do when they extensively outline. What’s the fun of that?  In writing, as in reading, it’s all about the discoveries I make along the way.

Thanks for having me, Donna!

Everyone can get a little more of Marie below!

Marie Lamba is author of the humorous young adult novel WHAT I MEANT… (Random House), which Publisher’s Weekly dubbed “an impressive debut.” She’s also author of the summery YA novel OVER MY HEAD about a girl who has either met the love of her life or a player out to break her heart.

In addition to her fiction, Marie has published numerous articles in national magazines. She lives in Pennsylvania, is a proud member of the Liars Club, and is an Associate Literary Agent for the Jennifer DeChiara Literary Agency in NYC.