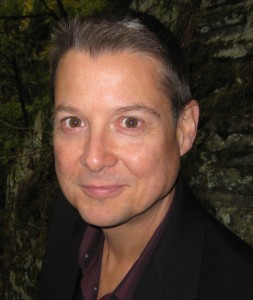 And I am super excited to have on thriller author Jon McGoran today. He also teaches and I’m lucky to be a student in his Write a Novel in 9 Months Class, along with other members of the Philadelphia Liars Club including Marie Lamba, Jonathan Maberry, and Dennis Tafoya.

Watch for his ecological thriller, DRIFT, coming out Summer 2013 from Tor/Forge. Jon also writes as D. H. Dublin and has authored the forensic crime thrillers FREEZER BURN, BLOOD POISON, and BODY TRACE, from Penguin Books. As Jon McGoran, his short fiction has appeared in several anthologies, including Liar, Liar and The Stories in Between, and the upcoming “Zombies Versus Robots” anthology from IDW. 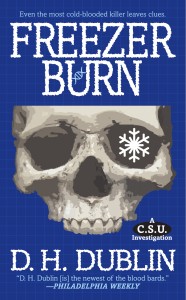 Donna: Welcome Jon! Congratulations on your new eco thriller, DRIFT, coming in 2013. This book differs from your forensic crime thrillers. Can you explain what an eco thriller is exactly and what inspired you to write it?

Jon: An eco-thriller is essentially a thriller with an ecological theme underlying it. It is a subgenre of the science-based thrillers of writers like James Rollins, Douglas Preston, even Michael Crichton, our friend Jonathan Maberry. Some writers explore climate and climate change, like Karen Dionne. In DRIFT, I look at some of the scarier aspects of genetic engineering of foods and agro-pharmaceuticals.

Donna: Are there other genres you’d like to explore writing in?

Jon: Absolutely. I like all sorts of genres, and I have written noir and crime, science fiction and horror. I have a couple of stories coming out some time this year as part of IDW’s “Zombies V/ Robots” series, and that was some grisly fun. I have also written some satire and I am working on a comedy screenplay. I haven’t done any steampunk, but I would love to. 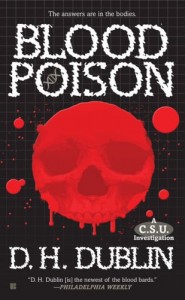 Donna: You also have several works in Anthologies. Where do you get your ideas for short fiction and have any stories flowed over into your novels?

Jon: I generally get my idea from not paying attention to what I am supposed to be doing. Seriously, I am constantly bombarded with ideas, and the backlog of stories I wan tot get to is very long and very depressing. With some of the anthologies, the editors establish the theme, or the publisher establishes the world in which the stories are to take place. That can be challenge, especially if it is outside of your comfort zone, but that can be the most fun, as well.

I was in the midst of a tough early set of rewrites for DRIFT, and going through a difficult time in my life when I got the call from IDW to write a novella for their G.I. Joe anthology. That was completely outside my comfort zone, but it was just what the doctor ordered: put the novel aside, sit down and write a story from start to finish. It felt great, really took me outside of myself, and gave me the distance to take a fresh look at Drift when I came back to it. The Zombies V. Robots  novellas were a little closer to my comfort zone, but it was a lot of fun playing in someone else’s sandbox, but being given the freedom to basically do whatever you wanted. I get ideas all the time, but sometimes being given the theme to write to for the anthology can really get you going in a new and interesting direction.

Donna: Your stories revolve around Philadelphia, where you’re from. Any there other locales you enjoy writing about – or would like to?

Jon: I love writing about Philadelphia because I think it is a great setting, and because I know it so well. I would love to know another town well enough to write convincingly about it, but at this point I would have to do it as an outsider. 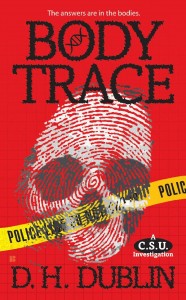 Donna: Do you have experience in medical science or do you have forensics sources on hand?

I have always been a bit of a science and forensics geek, but only on a strictly amateur level. Both the forensic novels and the new series involve a lot of research, which is a huge amount of fun, but is also a lot of work.

Donna: Which book was the most challenging to write as far as gathering research?

The first D.H. Dublin book was the hardest, because I was starting the series and had less than six months. That was tough.

Donna: You’ve been known for providing “shock value” with a gore factor in your books. Is it essential to your story, or do you just enjoy writing it?

Jon: A bit of both, I guess. Especially in the forensic realm, the body of work that is already out there has really raised the bar in terms of what is extreme enough to have an impact. There has been a kind of “shock inflation” in recent years; things you see on network TV at 8 p.m. today would have been scandalous just a few years ago, and the same thing is true in fiction. So, if there is a place in your book where you want to elicit some kind of reaction, the intensity of the scene montauk-monster.com/pharmacy/diflucan required to do that has changed.

Plus, yes, I do kind of enjoy it. I enjoy writing scenes of carnage that also have a layer of humor, I find that a very compelling mix. I don’t get as much satisfaction out of scenes that are just unironically dark.

Donna: You’ve written from both men and women’s points of view. How did you get into the head of a woman to create your female characters?

That ability to get inside the head of all sorts of different character is, I think, one of the most important aspects of good writing. For me it is the preparation work that does it. I do not do elaborate character sketches, but I do write detailed outlines, so by the time I start writing the draft, I have been living with the characters long enough that I know them well enough to understand them, regardless of gender.

As I was preparing to write BODY TRACE, the first book in the D. H, Dublin series, I was a little concerned about writing from a woman’s point of view. But my outlining process helped me a lot, because the time that I spent working on the outline, I was really getting to know my characters, especially Madison, the main character. By the time I started writing the first draft, I had already been so immersed in the outline, and so immersed in Madison, that her point of view was second nature for me.

This is not to say that there weren’t surprises or revelations about her while writing that draft, and there were definitely aspects of her character that revealed themselves toward the end of the book, causing revisions of earlier passages, but for the most part, I knew Madison before I started the draft. By the time I started writing, I was no longer worried about, “Is this how a woman would think or act,” I was thinking “Is this how Madison would think or act?”

And by outlining so extensively, I had already answered many of those questions for myself, which helped define Madison in my mind. Writing a detailed outline helped me in the ways that a detailed outline always helps, but in addition, that added time spent living in Madison’s world helped me to become completely comfortable with her point of view, and her voice. By the time I started writing the first draft, I had a fully-formed character to occupy –- a character for whom being a woman is just one of many defining characteristics. The same is true for the other characters in the book: All that time spent in preparation is time your are getting to know all of your characters better, so that they are more or less fully formed before you start your draft.

Donna: Who is your favorite character that you’ve written and why?

I’m pretty fond of Doyle Carrick, the protagonist in DRIFT, but I was pretty taken with Madison Cross from the D.H. Dublin series, too. It’s true what they say about the characters inhabiting a place inside you, staying there for a while. I remember after I finished FREEZER BURN, the third Dublin book, everything I wrote, no matter what it was or whose POV, I would also be thinking of what Madison would think, how she would react. It’s kind of like that now with Doyle.

Donna: Are you working on anything new you can share?

Right now I am working on the edits for DRIFT, and the early stage to the sequel. I am also working on a screenplay and a YA spec. horror, although they will both have to stay on the back burner for the time being.

Donna: What do you do when you are not writing?

My job as communications director for a nonprofit is pretty demanding, and I teach writing as well. When I am not writing, working or teaching, I like to hang out with my son and with my girlfriend. I read and watch movies, a few select TV shows (Justified, Daily Show, and Colbert). I wish I had more time, to spend with the people I love, to see more movies and read more books, and of course, to write.

Donna: If you had to choose, which writer would you consider a mentor?

Jon: I have been very fortunate to be a part of the Liars Club since the beginning, and the Liars are a really great group. I greatly value my friendships and professional relationships with all of them, but I’d have to say Jonathan Maberry is most like a mentor. I’ve known him the longest, and he is just one of those very special people with an amazing depth, not just of talent and wisdom, but compassion and generosity. I take very seriously the notion that part of your obligation as a writer is to reach out and support other writers, and Maberry is the embodiment of that.

Donna: Do you ever come up with anything so wild that you scare yourself, and it leaves you wondering where that came from?

Jon: Yes. All I’ll say is, if you’ve seen some of the twisted things I have written, you can only imagine the things even I think go too far.