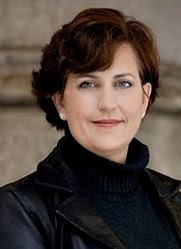 I’m thrilled to have New York Times and  USA Today bestselling author, Allison Brennan, visiting today. She took a break from her busy writing schedule to share with us how she loves research to kill off characters in her books. Plus comment for a chance to win a print or eBook copy of Silenced, the most recent book in Allison’s Lucy Kincaid series!

**Congratulations Amanda for winning a copy of Silenced!**

Knock off your characters
by Allison Brennan

I love research, and one of my favorite things to research is how to kill off characters. 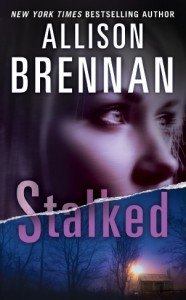 I particularly love my book on poisons. I’ve used it many times to come up with a realistic and unusual way of killing off people. For example, in Cutting Edge, I picked water hemlock as the way my psychopath killed off her ex-boyfriend. I had to do a bit of research on how this might be done, because hemlock is bitter, so I cloaked the taste in over-sweetened lemonade. In my upcoming Stalked one of the victims has a heart attack. I had to find a poison that would not only bring on a heart attack, but would be hard to detect in the autopsy unless the coroner was specifically looking for it.

One thing writers need to be mindful about is not showing research. Meaning, you should know how everything happens and why, but putting all your research on the page makes for a boring, slow-paced story.

While I have several books on my shelves, I find myself returning to the same four or five all the time. The Book of Poisons is one, the Practical Homicide Investigation (a textbook that cost me $100 but has been totally worth it), DSM-IV Made Easy (for criminal psychology), and a short book called “The Crime Writer’s Handbook: 65 Ways to kill your victim – in print.”

I found the latter, written by Douglas Wynn, at Barnes & Noble when I first started seriously writing, back in 2003 or 2004. The table of contents includes “Methods of Murder” such as: 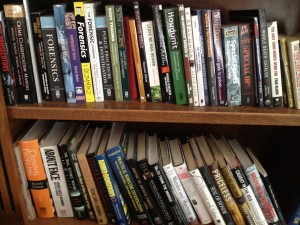 Just to name a few! What I love about this little black book is that, premier-pharmacy.com/product/arimidex/ though small, it’s dense with information and includes both real-life and fictional examples of all the methods of murder he discusses, as well as how forensics and crime investigation would work (whether you could get away with it!) 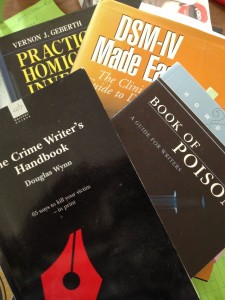 For example, under “Poisons (industrial): Mercury” he explains what it is used for clinically, the dangers and precautions, and what it does. Then goes on to illustrate real-life examples where mercury was used to kill:

“Roland B. Molineux supposedly poisoned two members of the Knickerbocker Athletic Club of New York in 1889, by anonymously sending through the post mercuric cyanide mixed with Bromo-Seltzer crystals. He was first convicted of the murders but at a subsequent trial acquitted.”

Under “Drowning” he illustrates that murder by drowning is not common, but there are real-life examples:

“Denis Nilsen, during his London killing spree of 1978-1983, dispatched two of his fifteen victims by making them insensible through drink and then putting their heads in a bucket of water.”

A fictional example Wynn uses: “In Ross Macdonald’s The Doomsters a woman is stunned with a wine bottle and then dumped in the sea to simulate suicide.”

In addition to my books, I follow a lot of crime news on Twitter, watch television, and read the crime blotter. I know, I’m not normal.

I know television gets it wrong a lot, but sometimes they use things I already know in new and different ways. NCIS does this a lot – using poisons, unusual weapons, acid, drowning, and more. Inevitably, something said or done has me thinking, “What if …?”

In Sudden Death my villains tortured the victims with acupuncture needles before slitting their throats. In Playing Dead my villain buried his victims alive. And in The Hunt he took women out into the middle of the Montana wilderness, then hunted them with a big game rifle. 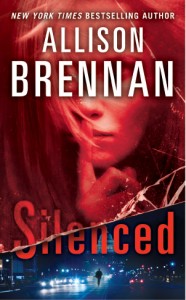 There are of course the standard methods of murder. Guns, knives, strangulation. And they’re standard because they’re the most common. Sometimes, like I almost did in Stalked, you can get hung up in trying to do something different that you forget the story. Remember: it’s all been done before. Do your research, but focus first and foremost on the story.

What is one of your favorite ways to kill a character? Comment for a chance to win a copy of Silenced, the most recent book in my Lucy Kincaid series.

Catch up with Allison here on her website , Twitter, and Facebook. Winner of Silenced will be announced October 18th! Winner can select print or eBook for U.S. and Canada only.