My husband and son are camping this weekend with the Scouts. It got me thinking back to a camping trip I took 20 years ago when I was in college and a carefree, socially irresponsible thing. 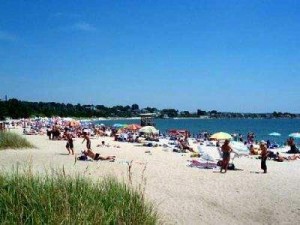 Whoever heard of Rocky Neck State Park? Until Brenda mentioned it, I hadn’t.

It was 1993 and Brenda was my downstairs neighbor. We met in college. I helped her get an apartment in my building. We bitched about college. We shared coffee on Sunday mornings. And we went biking. But we’d never vacationed there before.

“Hey,” Brenda said that summer day long ago when I was in the thick of my 20s waiting for life to happen. “Let’s go camping and bring our bikes.”

Brenda was an outdoor enthusiast. I loved biking. So I agreed. Even though I had reservations about being with her so long.

She planned the trip and got a campsite on Connecticut’s shores for three nights.

Brenda was annoying. She was a save-the-trees, hoard-cans-and-bottles kind of person. She would yell at me for throwing out tuna cans. I ate one can of tuna a month. Did I need to save them? Tuna reeks. My cats would have needed sedation. I offered to leave them on her doorstep. She liked that. So I did.

Brenda was cheap. She would sneak back to work at night to fill bottles with water from the office water cooler. She would swipe bags of ice from the office freezer. She even made an extra trek to get ice for our camping trip. There was one bag left over that she insisted on saving, and so it got squeezed into my freezer.

Brenda didn’t share well with others. The money we pooled for the groceries was figured out to the penny. She told me to bring my own bug spray. Her bottle cost $5.58 (and that was a lot of money).

I wanted to buy a bottle of vodka for our trip. Brenda had another idea. At her company picnic that week they offered Dixie cups of liquor. She collected the cups and snuck back to her car to fill up an empty bottle. She made lots of trips. We got our free bottle.

The steamy August day that started our trip eventually dawned. I wanted the air conditioner on. This was selfish of me. Brenda was not paying the extra gas it used.

Fine. No AC. But, I was not giving up my cigarettes. Whose car was this anyway? I blew my smoke in Brenda’s direction.

We got to Rocky Neck State Park. We set up camp. Our first day there, we biked to the ocean. Sailboats glided in the distance. I imagined sexy college boys on then. By then, I wished I could hitch a ride back home.

Alone with my peaceful thoughts, I vaguely heard Brenda’s chit-chat. When her words finally penetrated, I tried to jump back into my sailboat fantasy. Too late. She was educating me on the environmentally amoxil safe way to dispose of human waste.

Or – the politically correct way to shit in the woods. Should I write down directions in case I was tested later? I did.

The Politically Correct Way to Shit in the Woods
1. Find a big rock.

2. Make sure rock is facing sun.

3. Squat and proceed with business on rock.

“Yes,” Brenda said with authority. “This ensures the sun will disintegrate the particles. Then the rain will wash them off the rock. You must not use toilet paper unless you carry it back with you. And then use only one sheet.”

While I was pondering the best way to air-dry after smearing, Brenda informed me she’d like to go for a hike. She’d seen some trails nearby. Would I like to go?

I froze. And be tested on my smear factor? No thanks, class is cancelled for today.

I begged off, claiming a stomach ache. I anticipated solitude all afternoon and pedaled back to camp.

I read a little. Ate some lunch. And disturbed Brenda’s environmentally-sound habitat. I smoked cigarettes and threw the butts on the ground. I peed in the woods and used wads of toilet paper. I tossed soda cans in the non-recycle trash. Just because.

When Brenda returned to camp, she pursed her lips and sighed. I set down my book (next to the dirty plastic plate I had planned to stick in the garbage at a visible angle) and gave her my attention.

She dropped her knapsack with a huff. “I can’t believe it.”

“Can’t believe what?” I damn near wanted to giggle but kept a straight face.

She placed her hands on her hips and wailed. “I forgot to smear!”

And that was my holiday with Brenda.

I chain smoked during the entire car ride back home. I was nearly giddy thinking of my soon-to-be alone time. Locking the door of my apartment. Stretching out on my bed. Taking the phone off the hook. I planned to have more than a Dixie cup of liquor too.

Brenda had defeated me in the end.

The bag of ice she had scoffed from her office was too big for my freezer. It had burst open the door and fallen to the floor, along with all its other contents. It had all melted and putrefied for days in the heat.

I couldn’t get to the tequila now under the sink.

I turned to gag. I didn’t know if I would make it to the bathroom.

But I did know it would definitely get smeared.

So, that’s my story, and I’m “sticking” to it. Do you have any funny camping stories to share from your youth, or more recently?