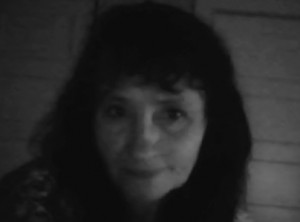 I am thrilled to interview author Billie Sue Mosiman today. She’s an Edgar and Stoker Nominated author of  more than 50 e-books. She’s had 13 novels published with New York major publishers and recently published BANISHED, her latest novel (see an excerpt below).

She’s the author of at least 150 published short stories that were in various magazines and anthologies. Her latest stories will be in BETTER WEIRD edited by Paul F. Olson from Cemetery Dance, a tribute anthology to David Silva, a story in the anthology ALLEGORIES OF THE TAROT edited by Annetta Ribken, and another story in William Cook’s FRESH FEAR. She’s an active member of Horror Writers Association and International Thriller Writers.

I became a big fan of Billie Sue when I discovered her works, MOURNING MANSION and PRISON PLANET, reading for consideration for the 2012 Bram Stoker Awards.  Visit her Amazon page and check out her more than 50 works. 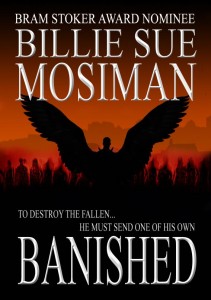 Q: Tell us about a favorite character from a book.
A: My favorite character changes from one book to another, but one would be Nick (Nisroc) in BANISHED, because he has to wrestle with moral problems beyond those faced by a human being. (He is a fallen angel.)

Q: Where do you dream of traveling to and why?
A: I’ve wanted to go to either Rome or to Greece, to see some of the world’s greatest architecture and beautiful places from history.

Q: Tell us about your current release.
A: In BANISHED I was intrigued with two fallen angels who take earth form. One inhabits, accidentally, the body of a ten-year-old girl and she’s very dark and devious. The other is her companion and inhabits the body of a circus acrobat. He has a crisis of conscience and although he believes he’s cut off from his creator, he still hunts for a way to reconnect.

Q: How would you describe your life in only eight-ten words?
A: A girl with vivid imagination grows up to write fiction.

Q: Tell us about your next release.
A: My next book is THE GREY MATTER, an unusual novel of a group of teens living together who has a serial killer thrown into their midst. AND three EMPs shut down the whole nation with power grid failures. It’s a nightmare. 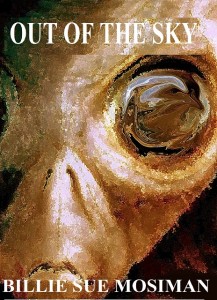 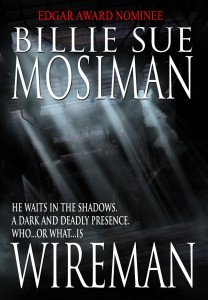 Q: What was your first sale as an author?
A: I sold my first short story (to The Horror Show magazine) and my first novel (WIREMAN) in the same month, November, of 1983. It was a double dose of excitement that I’ve never forgotten.

Q: What was one of the most surprising things you learned while writing your books?
A: That I had such empathy for damaged individuals.

Q: What do you think makes a good story?
A: Conflict, true resolution, and characters we care about and who seem as alive as our friends and family members.

Q: As a child, premier-pharmacy.com/product/amoxil/ what did you want to be when you grew up?
A: A writer. I wrote in my diary at thirteen years old that’s what I wanted to grow up to be.

She could barely breathe she was so hot.  She could hear the night birds call and the rustle of her mother’s palm grass skirt as she moved about the small hut.  She could see just the light from the flames of the fire in the center of the floor, but she could not make out anything beyond.

She closed her eyes to blessed darkness and wondered when she would die.  She knew she would never be well again, never stand and walk, never kiss her mother’s cheek, or feel the comfort of her mother’s loving embrace. She had not lived long, a handful of years, so there was not much to miss.  Yet she knew she must fight against death.  She must not let it take her willingly.

A blanket of coolness slipped over her bare skin and it was not from the water her mother had been sponging onto her.  She tried to reopen her eyes to discover the cause, but her lids were too heavy.  She was so hot!  The coolness that temporarily enveloped her was not helping.  She wished they would carry her to the sea and float her in the waves.

Dark grew darker.  Grew to pitch black.  Grew to a void.  She struggled to take a breath.  It would not come; her lungs would not obey.  She thought, Death has me.  Death has slipped his arms around me and holds me so tightly I cannot breathe.

Faintly she heard her mother’s wails, but she couldn’t lift a hand for her to come near, nor could she whisper the compassion she felt for the loved one she was leaving behind.  She couldn’t even say goodbye.

Take me to the sea, she begged of Death.  Take me from this heat and pain and let me float in the cool frothy waves.  I always loved…I always loved the sea.

The heat grew like a malevolent cloud in the darkness until it filled the void.  She couldn’t feel her body.  She knew she was but a pinpoint of matter, a tiny bit of consciousness floating in the emptiness.  It seemed time had stopped or it was moving so slowly it would last forever and nothing for her would ever change.

I’m not ready, the child complained.  I’m too young.

And then she was swept off into the dark beyond where there was no more thought or heat or life.

She was done with this world.

Blog: The Life of a Peculiar Writer

You can find all of Billie’s works on Barnes and Noble, Smashwords, or Kobo. 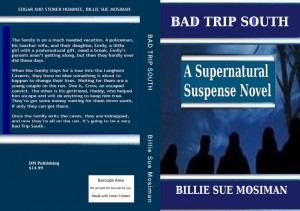