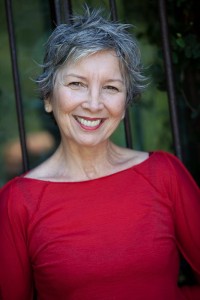 Today Rochelle Staab is here to talk about going beyond pure reason in writing about the occult. She is the bestselling author of the Mind For Murder Mystery series and a 2012 Anthony Award nominee for Best First Novel. If you ever wondered what if or why, stayed up late to find out whodunit, or read the last page of a story first, then you understand the need to know and are a mystery lover like Rochelle. She puts characters in danger, then answers the who, what, where, when, why, how, and what ifs, all the way to The End.

BEYOND PURE REASON
by Rochelle Staab

Call me a supernatural agnostic. My is-it-or-isn’t-it attitude toward the mystical began in high school on a rainy afternoon in the basement study of a Midwest mansion. Three girlfriends and I were goofing with the Ouija board we found hidden in a bookshelf. Snorting with cynicism at the board’s responses to our queries we dared the raunchy spirit, or whatever was guiding the planchette, to appear. Our answer bounded through the empty house and down three flights of steps. Its thunderous live appearance sent us into a screaming huddle. Decades later, not one of us can forget, explain, or deny our terror. 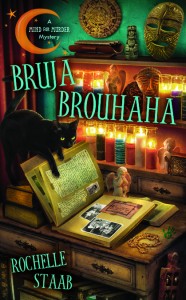 The Ouija experience didn’t stop me from exploring the supernatural; it fueled my curiosity. Years later my career transplanted me to Los Angeles where psychic and occult shops are as prevalent as banks and delis in Manhattan. We Los Angelenos will give any crackpot a chance—once. And I did. Psychics, séances, palm reading, tarot reads, and astrological predictions left me thinking “lucky guess” if/when they proved correct. I viewed fortunetelling as sleight of hand, a shrewd knowledge of body language, coincidence, or a flat-out scam. But I won’t deny the possibility of mysteries in the universe beyond my comprehension.

As a writer, I was intrigued with an idea to drape a veil of mysticism over a rational murder investigation. The cerebral view of religion and cults held by my former, real-life Religious Philosophy college professor inspired me to create Nick Garfield, a younger, wittier, and better looking version who studies belief systems, and under the rose lends LAPD a hand with occult-linked crimes and scams.

I wanted a strong character to stand up to Nick’s intellectual certainty and mirror my personal doubts. A psychologist friend with a contemptuous view of the supernatural provided the role model for Liz Cooper, my non-believing protagonist/shrink. Liz employs Nick’s expertise to help her clear a friend of a murder charge in my first novel, WHO DO, VOODOO? Liz doesn’t believe. Nick does. The Mind For Murder Mystery series exploits their differences, leaving the reader to decide who is right. 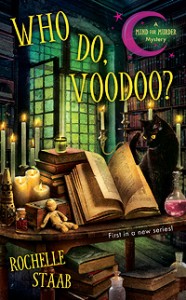 De-mystifying the occult enough to write about it became a challenge and an adventure. WHO DO, VOODOO? opened with a mysterious tarot card. Couldn’t be just any card. My search led me through four months of tarot reading classes to understand the Fool’s journey.

The plot twisted to Vodou. The syncretic religion developed in the 17th century when French and Spanish missionaries forced West African slaves in Haiti and Cuba to convert to Catholicism or be punished as heretics. Loyal to their homeland beliefs and fearing for their lives, the slaves employed icons of Christian saints to manifest their African deities. The resulting syncretic religions, practiced in secret and never written down, became Haitian Vodou and Cuban Santeria.

The commercialized voodoo we find in the media is an offshoot of the spells, rituals, and superstitions practiced by powerful 19th century New Orleans voodoo queens. Their stories fascinated me enough to take a tour of the French Quarter with a voodoo priestess. I followed her through back rooms of voodoo shops and into sanctuaries. She gave me a lesson in how to hold spirits at bay in a cemetery.

My second novel BRUJA BROUHAHA involves Santeria—the Cuban version of voodoo. In search of another first-hand experience one bright Saturday morning I wound up at a tiny altar in the back room of a downtown Los Angeles botanica (Santeria charm and ritual shop) while a local Santera (Santeria priestess) performed a protection spell on me. She only spoke Spanish; I only speak English. My experience became a scene in BRUJA BROUHAHA.

I picked up a few new habits along the way: you won’t see me set my purse on the floor (money drain) or hear me wish evil on people (comes back to you.) One thing I absolutely believe in? Parking Fairies.

Like my doubting psychologist Liz Cooper, I keep my mind and my eyes open. However as I’m working, every now and then I look up to the sky and say, “Fiction. I’m writing fiction.” Just in case.

Rochelle Staab, a former award-winning radio programmer and music industry marketing executive, blends her fascination with the supernatural and her love for mystery in the bestselling Mind for Murder Mystery series featuring Los Angeles psychologist Liz Cooper and professor Nick Garfield. BRUJA BROUHAHA, the second novel in the series, follows WHO DO, VOODOO? an Anthony, Agatha, and Eureka! Best First Novel nominee.

BRUJA BROUHAHA, the second novel in the Mind For Murder Mystery series will be released on August 7. A mid-city clinic assignment near historic MacArthur Park sends psychologist Liz Cooper into the midst of local mayhem, a puzzling disappearance, and a vindictive Santeria hex. Liz and her new love, Religious Philosophy Professor Nick Garfield, help an elderly Santera through a heart-breaking tragedy with repercussions that test their relationship and Liz’s professional ethics.