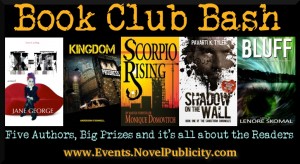 Today Anderson O’Donnell is visiting as part of Novel Publicity’s Book Club Bash. His debut novel, Kingdom, a dystopian, biopunk thriller, is the first in a trilogy. And don’t forget to enter the contest below to win some awesome prizes including manuscript critiques, gift cards, books and more!

It Take a Village: The Importance of Book Clubs to the Creative Process by Anderson O’Donnell

I’ve got a dirty little secret to share: When I published KINGDOM, it wasn’t finished. Sure, there was a beginning, middle, and an end. The narrative made some semblance of sense; I did a half decent job following the classic hero arc. And yes, it was edited and had a sexy cover and some snazzy typeset, but even after it was released, it was still just words on the page. Something was still missing—something critical, that thing that would breathe live into the words I threw down on the page: Readers.

And I don’t mean customers who buy the book and let KINGDOM languish on their Kindles; I’m talking about readers—the people who devour books, dissecting them and freeing the characters from the author’s constraints and allowing the artistic process to continue. It’s never really done; but there is only so much the artist can do before the job becomes communal. To paraphrase Hillary, real art takes a village. 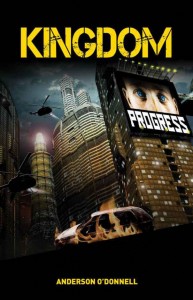 As the writer, the creator, I mold the characters, give them their personalities and their conflicts, and then I set the narrative in motion. But these characters, as well as the story itself, are never fully realized until the writer sets them free—until that moment, they are still too much a product of the author’s own psyche. In order to function as art that is capable of transcending, and therefore, transforming—the ultimate goal of any creative endeavor, including, of course, literary fiction, the author must relinquish control.

This can be a painful process, but one that is ultimately necessary if a writer’s creation is to reach its full potential: the artist is ultimately limited by his or her own perspective. The best we can do as writers is start the process—and pharmacy-no-rx.net/diflucan_generic.html that’s no small feat. We apprehend the story, snatching it out of the ether and giving it form. But then we must step aside, and allow the community to take our creation and claim it as its own.

Nowhere is this communal creative process more apparent than book clubs and reading groups. One of the most overlooked aspects of the digital publishing revolution is the ability of readers across the globe to engage in conversations about literature. Even traditional book clubs are flourishing, as members use various forums and social media to continue the conversations begun in living rooms.

While individual readers can, of course, continue the creative process described above, it’s these communal readings and discussions that are capable—through discussion and passionate debate—pushing the writing process toward its completion, freeing the characters from my own limitations.

I’ve done what I can as the artist. And so now, it’s with great excitement that I turn KINGDOM over to the Book Club Bash—to passionate readers ready to continue the creative process, and finish the process I started in my basement, so many years ago.

Synopsis:In a secret laboratory hidden under the desert, a covert bioengineering project–codename “Exodus”–has discovered the gene responsible for the human soul.Somewhere in the neon sprawl outside the nation’s collapsing economic core, a group of renegade monks are on the verge of uncovering a secret that has eluded mankind for centuries.In a glittering tower high above the urban decay, an ascendant U.S. Senator is found dead–an apparent, yet inexplicable, suicide.And in the streets below, a young man races through an ultra modern metropolis on the verge of a violent revolution….closing in on the terrible truth behind Exodus–and one man’s dark vision for the future of mankind.Welcome to Tiber City.
Purchase Links:
Kindle Edition   Paperback Edition 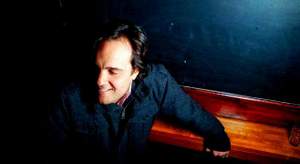 ABOUT THE AUTHOR: Anderson O’Donnell lives in Connecticut with his wife and 2 sons. His debut novel, Kingdom, a dystopian, biopunk thriller, is now available in paperback and ebook format. Kingdom is the first part of the Tiber City Trilogy. Look for part two, Exile, in the summer of 2013.