I often get asked if the characters in my paranormal suspense book A HUMAN ELEMENT are “me”.

While yes, much of me is in my characters the question I don’t often get asked is “are the places in your book real?” Yes they are! Some places I re-named and some I didn’t. I’m sharing some of my photos of these places below that Ben Fieldstone and Laura Armstrong frequent in A HUMAN ELEMENT. From New York to Hawaii. 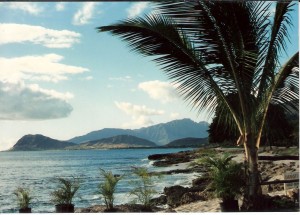 I was a photographer in the U.S. Navy at Pearl Harbor in Hawaii as Ben is in A HUMAN ELEMENT. I too, worked in Fleet Intelligence in the “building with no windows” processing top secret film. 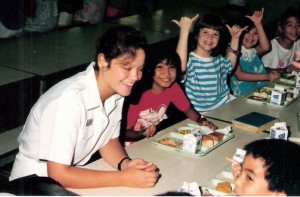 The beauty of Oahu is amazing with its violently defined landscape, a place to find – and keep – secrets in its hidden spots. I also lived off base in Honolulu. Likini, the wife of Ben’s friend, in A HUMAN ELEMENT is actually named after the street I lived on, Likini Street (where I got around in a Herbie-styled 1972 white VW bug). 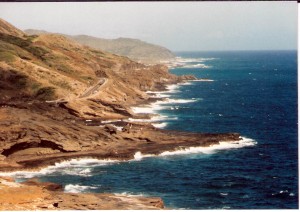 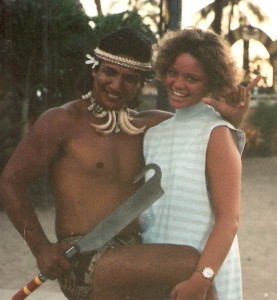 One perk about being stationed in Hawaii in the late 1980s? Being there with the hottest Hawaii series going on – Magnum P.I.! It was so cool when Tom Selleck came through Pearl Harbor base filming Magnum P.I.! See him cruising in his Ferrari. That’s as close as I could get 🙂 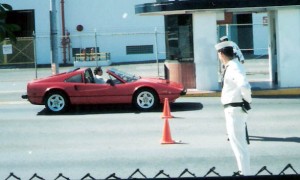 The main setting of Coopersville, New York is actually the small Upstate New York town of Westerlo that I grew up in. It’s nestled in the Helderberg Mountains of Albany County.

The house Laura Armstrong grows up in is my house. An old farmhouse on acres with an apple orchard, rambling rock walks, a garden, and barns. I had a shale driveway and searched for arrowheads as Laura did. My mom also made big pickles from our garden that would sit for months in large, cool crocks in the cellar. The very rock walls Laura walked at night were the same walls I stood on under the moon in my nightgown. The trees she climbed to sing from were the same trees I climbed and sang from. 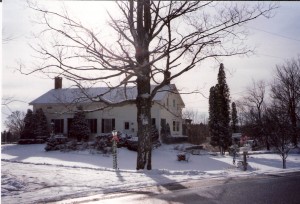 Laura as a young girl at her country home:

Laura Armstrong grabbed onto the moss-covered branch and pulled herself up into a nook in the biggest tree she could find. At seven years old, she stood compact and full of muscle from hours running through the woods surrounding her hilltop home. At fifteen feet up, the branches of the enormous, old oak bowed open to the Catskill Mountains in the distance, behind the farmhouse she shared with her parents. Its grand leaves folded outward like a green stage curtain beckoning its audience: Come, sit for a while, it called. Forget your worldly worries. Be entranced.

She wanted to forget being worried. She had an anxious feeling that something bad was going to happen that day.

Coopersville Lake and its waterfalls are based on the real place of Rensselaerville, New York, the next town over from Westerlo. It’s an adorable old hamlet dating back to the Dutch settler days full of historic beauty. I would ride my bike there to Myosotis Lake, as it’s really called, to write by the water just as Laura does. Lake Myosotis is part of the lovely Hyuck Preserve. 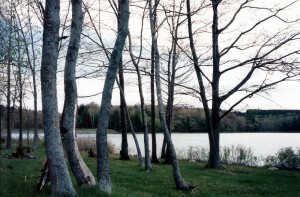 Here, Ben, returns to Coopersville to search for answers:

Ben set his bags down and looked out the window at the town. It hadn’t changed since he and his parents stayed here at the lake cabin on vacation. It remained a small town tucked away in the southwest part of Albany County in the foothills of the Catskill Mountains. 18th and 19th century architecture graced Main Street from the days when the Dutch had settled the area over two-hundred years ago.

It was noontime and he didn’t want to waste any time. He would take the waterfall path to the lake. The place his parents died. A place he hadn’t been to in over twenty-five years. He envisioned stepping out from the woods to the wide open lake. He hoped to feel something. For years he had felt nothing. 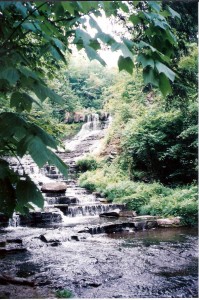 Ben grew up in New Paltz, New York, and Laura goes to college there, as I did. It’s still one of my favorite places to visit in the Fall. It even has the oldest inhabited street in America, Huguenot Street. Yes, I did indeed frequent P&G’s pub in New Paltz with my fake I.D. as Laura does. The Bakery, Laura’s favorite eatery, is an adorable place tucked off a side street that offers delicious food and a courtyard to relax in on sunny days. I still stock up on food there before a hike at the Mohonk Mountain House, a place Ben visits for his photography business. 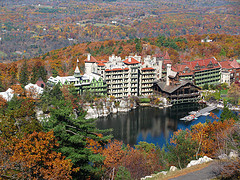 Laura meets her roommate at New Paltz University and makes an instant friend:

“Hey, it’s the late arrival,” Moe said. “You got a fake I.D.? Man, do I need a drink! My brain is already fried from trekking across this dinosaur of learning!”

Laura smiled for the first time in days and found herself chugging down a pitcher of beer at P & Gs bar with Moe an hour later, after forging the worst fake I.D. in the history of the school. They became best friends from the beginning.

The beauty of Oahu is amazing with its violently defined landscape, a place to find – and keep – secrets in its hidden spots. I also lived off base in Honolulu. Likini, the wife of Ben’s friend, in A HUMAN ELEMENT is actually named after the street I lived on, Likini Street (where I got around in a Herbie-styled 1972 white VW bug).

I had fun incorporating the places I know in A HUMAN ELEMENT, but I’m challenging myself to write about new places in its sequel, A HIDDEN ELEMENT.

Do you write about the places you know?