I’m excited to have Catherine Stine back on my blog for the blog tour of her newly released, Ruby’s Fire, the sequel to the award-winning FIRESEED ONE. See my 5-star review on that here!

The Ruby’s Fire tour, sponsored by Giselle at Xpresso Book Tours, runs through August 16. It’s packed with reviews, juicy excerpts, posts on how to find and keep inspiration going, love triangles, and interviews. PLUS epic prizes, including the grand prize: a Kindle with built-in WiFi and a USB charger tossed in as icing on the cake. Other prizes include a signed poster of Catherine’s illustration of the flying Reds from Ruby’s Fire and loads of free books and ebooks. Enter the giveaway at the bottom of the post and follow the tour!

In Ruby’s Fire, seventeen year-old Ruby, deals with issues that relate to beauty and sexuality as other teens do. Most girls are thrilled when they realize that their beauty is unfolding. I wanted to create a twist on this, which I think also exists for many girls in the throes of puberty and beyond: a character, who is uncomfortable with her extreme beauty, in Ruby’s case it’s due to the inappropriate and uninvited attention she gets from older men in the Fireseed cult.

In this extreme desert cult, girls are “claimed” as partners very early on. This idea took fire in part from watching TV coverage of the extremist Mormon sect, and those very young girls who had no way out. Here are a few lines from Ruby’s Fire that illustrate this: 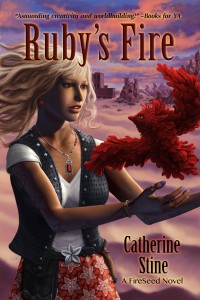 I see the man who will lead me away with him from the Fireseed alter to our gazebo. He’s the head of the Initiation committee. Stiles. He has a bristly beard and a back like a dried, curled up beetle. His eyes are sunken yet glinting out with an oily sheen as if he’s peering into my private pool of emotions. He’s hideously old—forty-one—a full twenty-four years older than me. I won’t survive his spongy lips on mine, or his bony arms pinning me down.

But I didn’t come unarmed.

In a less extreme population, say in contemporary cities, teens who blossom into beautiful women (and into gangly but handsome hunks) must still deal with a suddenly striking physique—and many don’t know how to negotiate this newfound challenge… and power.

Make no mistake about it; beauty is power, and it can be used to manipulate as well as transfix. Ruby has learned to manipulate through using her beauty, but she has no idea how to truly love a guy, and communicate honestly. This then, is part of her journey.

Ruby is ashamed of her attraction to the hardtalking, muscular Blane who serves as a bodyguard to the twenty-something proprietress of The Greening, Nevada Pilgrim. The Greening is a boarding school for nomadic teens that have witnessed gut-wrenching traumas, including, in some cases the death of their families.

Blane is ruggedly handsome, but frightening to Ruby. For one, his manner is uncomfortably reminiscent of the harsh cult she escaped. He bullies other kids, he bitterly teases her, and he badly injures her friend Armonk in a scuffle. Ruby feels that Armonk should be her partner. After all, he is gentle, patient, and loyal, all qualities that she’s never had enough of around her. So, why is she torn?

Here are a few teaser lines:

It feels wrong to lean on Armonk right now with Blane staring at me, a hungry, lonely look in his eye. It’s as if he’s never been hugged, never been fed, never been loved, as if the sight of Armonk touching me, even just to help me limp along injures him. “Thanks,” I tell Blane again. “I really mean that. That man would’ve killed me if I’d gone back.”

Blane only grunts, before forging ahead and beating us into the house.

“What’s his problem?” Armonk mumbles. But I know that he knows.

Is Blane too damaged to change? Is Ruby? You’ll see, if you read Ruby’s Fire, how this plays out, and if Ruby will ever be able to open herself up to real love, and honest communication. Also, will she ever be able to stop her dependence on Oblivion, her homemade elixir, made from Dragon Lizard venom? She’s used it to block out nightmares of the cult and the older men who plagued her. It’s been her coping mechanism. If she stops what will replace it?

Trauma, the paradox and responsibility of negotiating extreme beauty, kicking drug addiction and learning how to communicate and love honestly—this is the fare of Ruby’s Fire, and the real challenges for many young women and men today.

Ruby’s Fire by Catherine Stine
Series: Fireseed, #2 (however, can be read as a stand-alone)
Publication date:  June 26, 2013
Genre: YA Sci-Fi

Synopsis:
If everything about you changes, what remains?

AUTHOR BIO
Catherine Stine writes YA, New Adult and middle grade fiction. Her YA futuristic thriller, Fireseed One, illustrated by the author won finalist spots in both YA and Science Fiction in the 2013 USA Book News International Book Awards. It was also granted a 2013 Bronze Wishing Shelf Book Award and a 2013 Indie Reader Approved notable stamp. Her YA Refugees, earned a New York Public Library Best Book. Middle grade novels include A Girl’s Best Friend.

Fireseed One sequel, Ruby’s Fire is earning advance praise from reviewers and authors:
“Ruby’s Fire, returns to the sun-scorched earth of Fireseed One. In this long-awaited sequel, Stine delivers a thrilling adventure led by a new and exciting cast of characters. Ruby, Armonk, Thorn and Blane are memorable, and the romance is really well handled. Favorite quote: ” It feels wrong to lean on Armonk right now with Blane staring at me, a hungry, lonely look in his eye. It’s as if he’s never been hugged, never been fed, never been loved…” ”  -YAs the Word