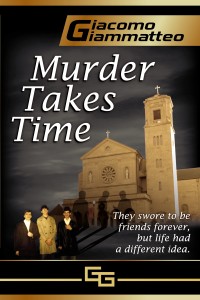 Today I have on crime author Giacomo “Jim” Giammatteo talking about what’s in a name. His debut novel Murder Takes Time has been called “a smart balance of conflicting perspectives that emotionally involve the reader in the New York underworld” by Kirkus Reviews.

What’s In A Name?
by Giacomo “Jim” Giammatteo

Do your characters pass the test?
My wife always gives our animals names I don’t like. For lack of a better way of saying it, they’re “girlie” names and, try as I might, I cannot—will not—call one of my pets “Sweet Pea.”

They Came In the Dark of Night
A few years ago, during hurricane…I don’t remember which one…two wild pigs roamed onto our property. Broke in is what they did. I’m still not sure they didn’t push the tree down that crushed our fence so they could accomplish the feat, but…somehow they got in. Several times I have thought of loading them in some kind of vehicle and dropping them off in the national forest, not far from here. Two things have stopped me: 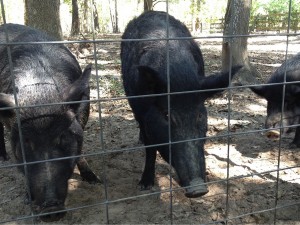 I know. You thought I liked pigs. I do like pigs, but one of these two is mean. The other one is just plain evil. She has Moby Dick eyes. Don’t believe me? Look for yourself. She’s the one in the middle, and in case you’re wondering, that is not red eye. =>

When the pigs first came they seemed sweet enough. I named the one with the longest nose Truffles, and the other one—who had tremendously curly hair—I named Curly. I thought it appropriate. Within two days my wife had changed those names to Lucy and Angel. And let me tell you, “Angel” is no angel. If my wife had taken the names a little further it might have worked—Lucifer instead of Lucy and…I don’t know, perhaps “Fallen Archangel,” instead of Angel.

So What’s My Point?
I thought about this the other night when I sat down to read. I was reading a suspense book, but the names of some of the characters didn’t fit. One guy was supposed to be real tough, mean, nasty…and his name was “Billy.”

How to Fix It
Maybe if the author had added something to the name. Called him “Billy Bats” or Billy “The Knife” Mancini. That takes Billy to a whole new level.

If you are a writer, this kind of name game gives you flexibility, and a great tool for character development. Suppose your book shows Billy as a youngster—innocent, before he went bad. Billy is a non-threatening, friendly name. It’s a warm name. But as the book progresses, and sweet Billy goes bad, he earns the nickname of “Billy Bats” or “Billy the Knife.” People can be intimidated by those names. Not so much by plain old Billy.

So think hard about your character names. Don’t assign them the first name that pops into your head. Names can be great for making readers remember your characters. Hannibal Lecter?

How about you? Have you ever read a book where the character names don’t fit? Does it bother you? 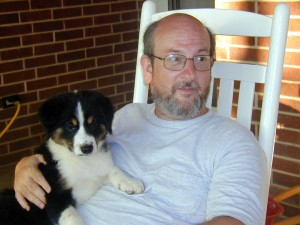 Giacomo Giammatteo is the author of Murder Takes Time, and A Bullet For Carlos. He lives in Texas where he and his wife have an animal sanctuary with 41 loving “friends.”

“I grew up in a large Italian family in the Northeast. No one had money, so for entertainment we played board games and told stories. I loved the city–the noise, the people, but it was the storytelling most of all that stuck with me.

My wife and I live in Texas, where we run an animal sanctuary with 41 loving “friends.” Sometimes I miss the early days, but not much. Now I enjoy the solitude and the noise of the animals.”